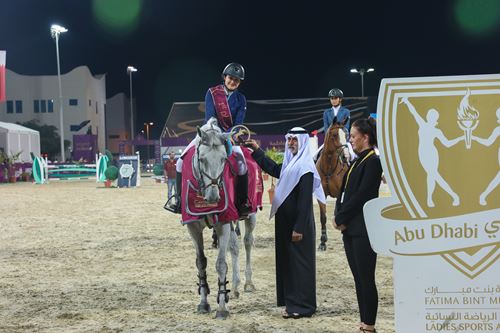 In attendance HE Sheikh Nahyan bin Mubarak Al Nahyan, Minister of Tolerance, the sixth edition of the FBMA International Show Jumping Cup drew to close this evening, as the equestrian arena at Al Forsan International Sports Resort witnesses the last jumps of the Cup.

HE Sheikh Nahyan bin Mubarak Al Nahyan, Minister of Tolerance, said that: “without the constant support of HH Sheikha Fatima Bint Mubarak and the continuous follow-up by Her Highness Sheikha Fatima bint Hazza bin Zayed Al Nahyan, Chairperson of the Fatima Bint Mubarak Sports Academy and President of Abu Dhabi Club and Al Ain Women's Club, this event would not be possible.

“This exceptional tournament is the result of a series of successes and developments year after year, in a spectacle that highlights the world-class quality of sports that Abu Dhabi enjoys as an international capital for such events.”

His Excellency also pointed out that the holding of this year's championship, which includes riders from around the world, supports the message of the social, religious and cultural diversity of the UAE, and enhances the presence of the Tolerance Initiative placing the UAE in an advanced international position by shedding light on the state of human coexistence, and acceptance of the each other; the UAE is a model of tolerance and coexistence.

His Excellency expressed his pride in the positive environment that the championship has succeeded in establishing among the public and followers in the stands, and to spread love and tolerance between nations and peoples, without distinction or discrimination by nationality, culture, race or religion: “We all share the appreciation of what we see in the stadium of individual excellence, collective effort, and beyond,” added His Excellency. “All this peaceful and positive competition, and mutual respect among the members of the competing teams, is greatly welcomed.”

He praised the organization of the tournament and the level of competitions which brought together the elite of the world's riders and compete for one of the exceptional international titles in the field of professional equestrian sports.

H.H. Sheikha Fatima Bint Hazza Bin Zayed Al Nahyan, Chairwoman of Fatima Bint Mubarak Ladies Sports Academy, President of the Abu Dhabi and the Al Ain ladies clubs said that FBMA International Show Jumping Cup 2019 could not have achieved such success if not for the utmost support of Her Highness Sheikha Fatima Bint Mubarak, President of the General Women’s Union, Chief Executive Officer of the Family Development Foundation and President of the Higher Council for Motherhood and Childhood – Mother of the Nation. She expressed her pride for the outstanding participation of Emirati riders in this year’s edition, saying: “The FBMA International Show Jumping Cup 2019 has witnessed an increase in participation, in addition to a spectacular performance by Emirati riders, which is a culmination of our longstanding efforts to foster Abu Dhabi’s position as an international destination for major sports events, as well as encourage women to flourish in sports and achieve their potential.

“The event has surpassed all expectations once again, and we truly admire the continuous efforts and persistence of all participating riders from the UAE; they contribute to promoting Abu Dhabi as a leading sports destination across the world,” added Sheikha Fatima. “The Academy would like to thank all of the riders, from the UAE and around the world, who gave competed with passion and fairness. We are also grateful to the sponsors who have helped make the sixth edition of this special event a great success. From all of us here at FBMA, we’re already looking forward to next year’s Cup, as we enable our community to engage with another world-class sporting event.”

HH Sheikha Shamsa Bint Hasher bin Mana Al Maktoum, Chairperson of the Women's Committee of the Volleyball Federation and the leader of the Al Wasl aircraft, congratulated the participants of the FBMA Talent category today, saying: "I was very pleased to meet the young riders from the FBMA Talent category. "I am proud to see the young female competitors under the age of 16 as for me, this is the main joy of the championship. I wish them all the best in their equestrian career, as they grow from one success to another."

H.E. Aref Al Awani, General Secretary of Abu Dhabi Sports Council, expressed his deepest gratitude to H.H. Sheikha Fatima bint Mubarak, Chairwoman of the General Women's Union, Supreme Chairwoman of the Family Development Foundation and President of the Supreme Council for Motherhood and Childhood for her continuous efforts to promote the prominence of women in all sectors.

Al Awani also praised the Mother of the Nation Her Highness Sheikha Fatima bint Mubarak, Chairperson of the Board of Directors of the Sheikha Fatima Bint Mubarak Ladies Sports Academy, President of the Abu Dhabi Women's Club, for developing the women's sporting sector and Her Highness’s support for this event.

Al Awani said: “The 6th FBMA International Show Jumping Cup has, once again, been a success on all levels. It has been fantastic and seen an increasing turnout of equestrian enthusiasts, individuals, families and future generations who aspire to learn and practice the sport. The event has established itself as a regular on the international sporting calendar, through its excellent organisation and facilities, as well as the excellent selection of recreational activities in the Equestrian Village. The Cup’s success is a contributor to the efforts we have at Abu Dhabi Sports Council, which aims to enhance Abu Dhabi's position as a sports destination that hosts the world's leading sporting events, and supports women's participation in various sports fields within the UAE.”