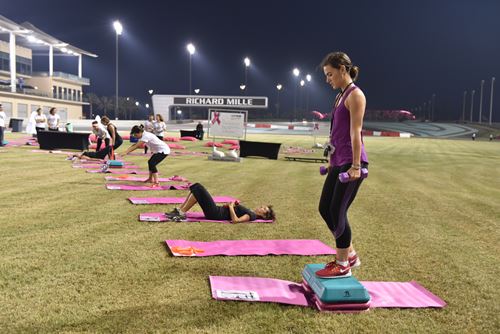 October does not only mark the drop of hot temperatures around the UAE! October is a month of pink; a month very important to women globally as many countries across the world unite in increasing attention and support for the awareness, early detection and treatment of breast cancer, which is by far the most common cancer for women worldwide, both in the developed and developing world.

Faithful to its mission of promoting women’s health and wellbeing, the Fatima Bint Mubarak Ladies Sports Academy, FBMA, joins its forces with Daman’s ActiveLife, Yas Marina Circuit, the Abu Dhabi Sports Council and Health Authority - Abu Dhabi (HAAD) to host “Circuits on the Circuit”, an event in support of the cause of beating breast cancer.

‘Circuits on the Circuit’ returns to the capital for the third time thisWednesday 12thOctober, as part of the GoYAS by Daman’s ActiveLife series, which has - every Wednesday for the past 3 years - provided an arena for Emirati women to exercise regularly and engage in fun, healthy fitness activities in complete privacy, while at the same time learning about key issues surrounding women’s health.

The event, that has a very strong charity component,will feature circuit training on the Yas Marina Circuit divided in two exercise stations along a giant ribbon made up of pink fitness mats. For each station completed FBMA will be generously donating AED50 on behalf of each participant, while Yas Marina Circuit will kindly match this donation adding up to a total of AED100 per completed station per person.

At the same time, an FBMA cycling activation will take place on the F1® track under the name “FBMA cycling session with Waheeda” by Emirati cyclist Waheedah Omar AlHadrami, at which FBMA will be donating AED50 per completed round for each participant.

Donations collected at the event will go to ‘Pink Caravan’, a pan-UAE breast cancer awareness and screening campaign, launched in 2011. Pink Caravan will be offering free breast screenings on its tent on site, located in GoYAS Village.

FBMA is also teaming up with HAAD, its education partner, to host a seminar on “Breast Cancer Awareness: Tips for Prevention and Q&A”, in the HAAD tent also located in the GoYAS Village.

On the margins of the event, participants will be able to enjoy an exclusive Get Driver Fit Zumba class that will take place from 8-9pm.

A new feature of the GoYAS, which will launch on this occasion, is a dedicated children’s zone of fun and active games through “Junior Gym”. Activities available for all children between the ages of 4-14 years (boys up to 10 years old) to try will include kung fu, martial arts, yoga, gymnastics and meditation.