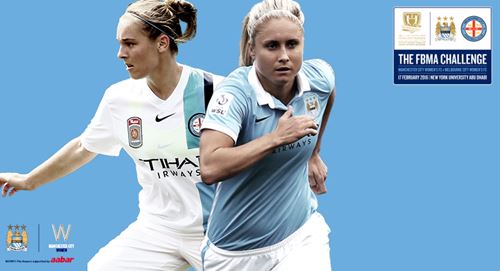 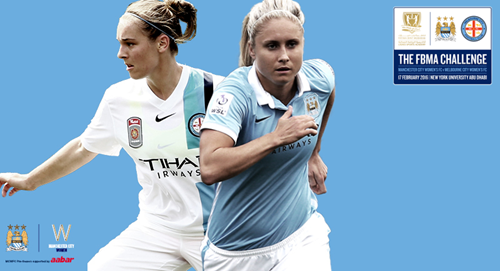 The fixture will be broadcast live at 14:00 (GMT) on both Club’s online channels as well as Abu Dhabi Sports 1 giving fans across the globe the chance to see the two women’s teams in action.

Both teams have enjoyed recent success with Melbourne City crowned Westfield W-League Premiers and Champions, and Manchester City qualifying for the UEFA Women’s Champions League for the first time in late 2015.

As part of MCWFC Pre-Season Training supported by Aabar, the UAE’s under-14 women’s team together with the UAE Women’s Football Committee will participate in a series of technical football clinics delivered by coaches from Manchester City Women. During the sessions participants will have the opportunity to train with, and learn from, professional female footballers who play at the highest level of the women’s game.

Facilitated through the Fatima Bint Mubarak Ladies Sports Academy, medical and sports science practitioners from the UAE will shadow experts from Manchester City Women to further study techniques and skills that can be incorporated into their working practice to benefit a host of female athletes in the UAE.

Commenting on the visit, Gavin Makel, Head of Women’s Football at Manchester City, said: “In addition to working with Aabar and FMBA in inspiring more girls to play football, this training camp will be ideal preparation for MCWFC ahead of their inaugural season in the UEFA Women’s Champions League.

"It will also be a fitting end to a memorable season for our newly crowned W-League Champions Melbourne City Women’s FC."

Raysa Al Ketbi, Operations Manager, Fatima Bint Mubarak Ladies Sports Academy, continued: “As our main focus we look to ensure that sport is an element of daily life for women in the UAE, and so we are extremely pleased that the UAE women’s football community will have the chance to partner with and learn from two elite women’s teams that play at the highest international level.

"We hope that their visit culminating in the FBMA Challenge will encourage even more girls and women to participate in football which has already become an emblematic sport in our nation."

Khaleefa Ahmed Al Mehairi, Business Support Director at Aabar Investments added: “Aabar Investments is thrilled to be able to continue its support of Manchester City Women’s Football Club in bringing them back to Abu Dhabi for their second pre-season, in line with our commitment to empowering female athletes here in the UAE and globally.

"We are proud that our relationship with the Club can benefit the UAE Women’s National Team."