She thanked the board of Abu Dhabi Sport Club presided by His Highness Sheikh Nahyan Bin Zayed Al Nahyan for support provided by the board to hold this championship. Furthermore, she referred to the fruitful cooperation shed by Equestrian Federation presided by Sheikh Shakbout Bin Nahyan Bin Mubarak Al Nahyan, thanking Abu Dhabi Equestrian Club, represented by its general manager, Adnan Al Naimi, for hosting championship competition and also thanked all the authorities sponsoring the event.

Sheikha Fatima Bint Hazaa said: “The academy always focuses on support of expectations of Emirati girls and support of their ambitions in sport field, until they become as a tangible fact on the ground  in order to raise the name of Emirates highly in regional and international sport yards, expressing that the academy is proud of participation of Emirati female knights in this international competition, besides an elite of world female knights and their abilities to achieve progressed places and raise the flag of Emirates highly in international sport fields.

She referred to that Academy’s organization of such international championship aims at developing woman sport sector through giving opportunities and chances of Emirati sportswomen to directly compete with an elite of world female champions for acquiring the experiences necessary for representing the country in international sport forums within national teams and fulfilling achievements and gains to Emirati sport.

Sheikha Fatima Bint Hazaa praised the bright success achieved by cup of Fatima Bint Mubarak for Jumping Barriers for the third year consecutively and the great participation of elite of world female and male knights, demonstrating that competitions of this year expanded to include younger ages of male and female knights. This reflects care of the academy about developing capability level of Emirati male and female knights by incorporating them in international competitions in juvenile age, for the purpose of helping them to promote and develop to professionalism on a world level. In addition, she praised the big size of public interaction with effectiveness of cup this year, referring to that the academy is willing to continue to support Emirati male and female knights and provide them with all forms of assistance to in all equestrian sports in order to develop and keep the gains achieved within the last period. This will be reflected on Academy future plans and programs. 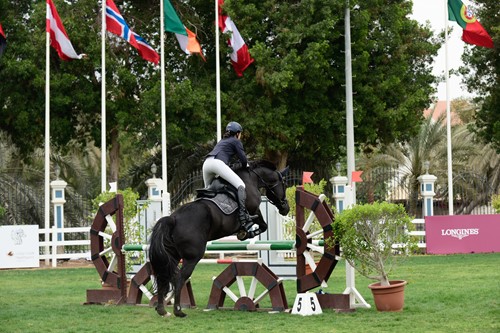 El Swedi embraces and presides the title of young horse class on the back of Lafita:

Equestrian sport workshop organized by woman committee in Gulf Union Media Sports was concluded by cooperating with Fatima Bint Mubarak Ladies Sport during the period 23-27 of this February.

The fellow Diaa El Din Ali, head of Gulf Sport Department, evaluated the media reports submitted by female students of Faculty of Mass Media, Zayed University, covering the championship of cup of the third version of Fatima Bint Mubarak Academy for Jumping Barriers. In addition, the students got the chance of practical application during the two days of the championship concluded before yesterday.

The workshop provided the students with the principal forms and models in journalism, along with explaining all sportive molds. The female students admired their first experience in sport media and the step was valued by woman committee showing them sport media and equestrian sport. The winner of second place, Amena Obid, one of the participants in the workshop, declared that she is delighted with this experience outside university fences, saying: “we had been previously expected that sport media is a thing dominated by youth and centralized only in football, but after holding the workshop, I loved the field work more and I wish such tournaments to be held on a continuous basis.

From our side, the female student, Maisa Mohamed El Jabri, expressed her enthusiasm of the idea of workshop having heard it from college professors. In addition, she participated to know the late news about sport media and how to write and cover events related to equestrian.

El Jabri went on saying: “Field work attracted me and approach to Emirati female knights encouraged me to drink from equestrian sea, and it urges me to know and document and to cover the event and hold interviews with female participants, and this is a new experience for me, and if I found ideas for upcoming workshops, I would be the first participant.” 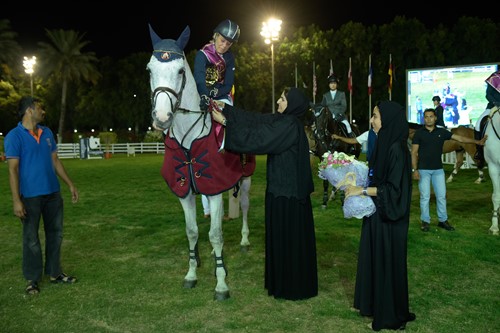 In presence of Fatima Bint Hazaa.

Sheikha Fatima BintHazaasaid in a word at this occasion: This party contributes to creation and development of motivations, tendencies and self-confidence of female knights, so that they could avoid confusion and deep physical stress of female competitors and could achieve effective competition and desired results.

She added: Emirati woman managed to reach a distinctive position in the world of horse races and championships of jumping barriers locally, regionally and internationally, fulfilling great successes, alluding to care of Fatima Bint Mubarak Academy for working seriously to overcome obstacles facing Emirati female knights to manage to meet their expectations.

Effectiveness of the, which the female knights, Academy female members, an elite of Emirati socialites and a number of the fellow ambassadors and officials attended, included a luxurious show of fast drawing and a competition including encouraging and motivating awards, together with other shows demonstrating the importance of equestrian sport and the role given by the academy to spread and strengthen equestrian sport in circles of society. At the end of the party, all the attendants thanked and appreciated Her Highness Sheikha Fatima Bint Mubarak “Mother of Emirates” for valuing her efforts in supporting the journey of Emirati woman and developing her abilities in all different fields.

Raysa Humiad Al Ketbi profoundly thanked Her Highness Sheikha Fatima Bint Mubarak “Mother of Emirates” and Sheikha Fatima Bint Hazaa Bin Zayed Al Nahyan, for their fingerprints and distinctive role in strengthening successes achieved by Emirati girl in championships of horses and jumping barriers and their care for charisma of Emirati girl in all regional and international forums to achieve the best results. She said:“we are proud of success achieved to the third version of cup of Fatima Bint Mubarak Academy for jumping barriers, achieving the greatest results from all sides locally and internationally for the name of Emirates in world of sport.” She added: “ we all followed the progress of the championship proudly for achievements, charisma and experiences fulfilled by Emirati girl, referring to her position by raising country flag highly in this international forum, forming an aesthetic background honoring Emirati woman.