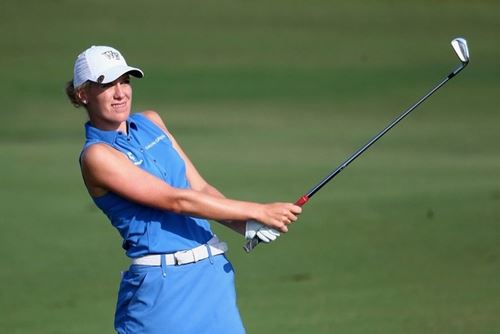 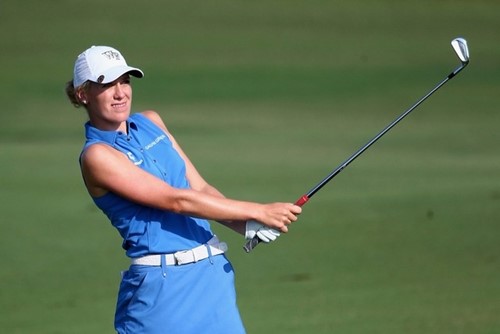 Olafia Kristinsdottir followed up her opening day’s 65 with another impressive 7-under 66 to take a three-stroke lead on the second day of the inaugural Fatima bint Mubarak Ladies Open.

Hot on the Icelander’s tail are a quartet led by Georgia Hall, who made a piece of history by setting a new course record 64.

She ended the day on 10-under and moved up 22 places to joint-second, alongside Gwladys Nocera, Beth Allen and Holly Clyburn at the Saadiyat Beach Golf Club on Thursday.

Nocera fired eight birdies to post a second-round score of 66, Allen maintained her strong start and Clyburn also carded a solid 66 to keep their challenge on the leader.

Kristinsdottir began the day brightly. She birdied the first two holes but bogeyed the next, before a third birdie putt on the seventh and an eagle to round off the front nine.

The economics graduate from Wake Forest University completed the back nine with birdies on the 11th, 13th and 14th.

Kristinsdottir kept her cool for a Ladies European Tour (LET) rookie under scorching conditions, saying: "I’m the one who decides if I let it affect me so I did everything the same as yesterday with no added pressure.

"The whole of Iceland was really excited for me and my phone was exploding, so I thought ‘I need to stay calm’, and I managed to do it, so it was really good."

Commenting on the days ahead, she added: "I’m just trying to stay in the now and hit one shot at a time and see where it gets me. This course really suits me; I love those greens."

For a player in only her sixth start on the LET, Kristinsdottir has so far shown nerves of steel to build on her opening day’s lead.

Hall, 20, was modest when asked about her new course record, focusing more on her technical game.

"I’m very happy because there were no bogeys and I played really well," she said. "Everything glued together and I had fun out there. I didn’t think of my score at all: I was just trying to make birdie after birdie.

"I had a couple of par fives where I had two putts and I holed some good 20-footers for birdie; I think I had four or five birdies within a four-foot mark, so my approach shots were really good today."

Moving up the ladder to challenge the front-runners were Melissa Reid, Christine Wolf and Sarah Kemp.

Reid shot a strong 65 to finish at 9-under in joint sixth along with Wolf and Kemp.

A bit disappointing on the day was India’s rising young star Aditi Ashok. She dropped to 2-under.

It’s also been a rollercoaster course for Minea Blomqvist who ranged from a handful of birdies to a double bogey.

"I’m happy with the round. It was nothing special today," said the Finn. "Yesterday I putted from six metres and in. Today they didn’t drop."