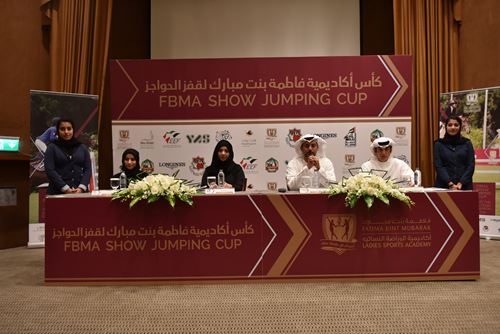 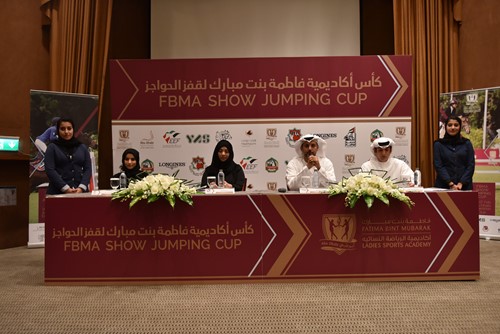 Under the patronage of H.H Sheikha Fatima Bint Mubarak, Chairperson of the UAE General Women’s Union, Supreme Chairperson of Family Development Foundation and Chairwomen of the Supreme Council for Motherhood and Childhood; the competitions of the FBMA Show Jumping Cup is to be held on Friday and Saturday the 26th and 27th of February 2016, in the grass track of Abu Dhabi Equestrian Club.

The tournament is being organized with the attention and monitoring of H.H Sheikha Fatima Bint Hazza, Chairwoman of the Fatima Bint Mubark Ladies Sports Academy (FBMA), President of the Abu Dhabi Ladies Club, and with the support of Abu Dhabi Sports Council (ADSC), and the cooperative organization of FBMA and Abu Dhabi Equestrian Club, and under the sponsorship Al-Shiraa Stables, Longines, Healthpoint Hospital, the National Service, Yass Sports TV and Emirates Arabian Horse Society.

This was revealed during the press conference held by the academy yesterday, Wednesday the 17th of February 2016 in Inter Continental Hotel, with the attendance of Fatima Al-Ali, representative of the FBMA; H.E Talal Al-Hashemi , The technical affairs director at ADSC; H.E Adnan Al-Nuaimi General manager of Abu Dhabi Equestrian Club and Mona Al-Shamsi, head of the Women Equestrian Committee of the G.C.C. 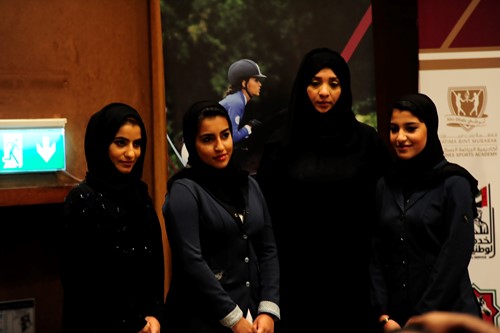 Over 120 riders will participate In this year’s version of the cup, ranging between professional, Junior and young riders, and representing 26 countries including Kuwait, Syria, Egypt, Qatar, Lebanon, Kingdom of Saudi Arabia, Denmark, Britain, USA and the UAE; in addition, the participation of nearly 190 horses in this event is also expected; which put this event in the roster of the most prominent equestrian events in the UAE and the Middle East.

The FBMA Show Jumping Cup is being held annually as a part of the FBMA events calendar in order to support equestrian sports and the other group and individual sports and to highlight the presence of Emirati women in the International sporting scene, and to give the practitioners of this sport and the national teams a chance for adding more achievements to the Emirati sports Achievements, as part of the academy’s’ pioneering role in presenting innovative programs and initiatives that aim to  develop the ladies sports movement on the basis of the patriotic princibles of the academy, and in pursuit of elevating the level of successes achieved by Emirati women in equestrian and show jumping tournaments, as per the plans of the academy aiming to develop the Emirati ladies sports sector. 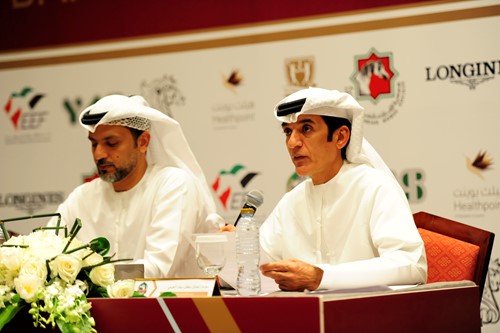 For his part, H.E Adnan Al-Nuaimi General manager of Abu Dhabi Equestrian Club, stated that the FBMA Show Jumping Cup is considered as a culmination of efforts spent by FBMA intended to encourage Emirati women and young ladies to practice Equestrian sports (the sports of the forefathers) and to take part in planting the seeds of passion for these majestic traditional sports in the local Emirati community represented by Emirati women. 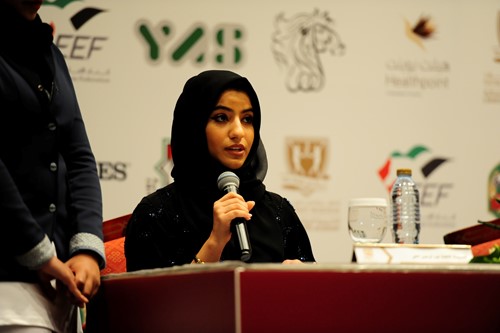 On behalf of FBMA, Fatima Al-Ali presented the academy’s deepest gratitude and appreciation to H.H Sheikha Fatima Bint Mubarak, “Mother of the Nation”, Chairperson of the UAE General Women’s Union, Supreme Chairperson of Family Development Foundation and Chairwomen of the Supreme Council for Motherhood and Childhood, for the continuous support provided by Her Highness for the sake of elevating the status of Emirati women and to fulfill their ambitions and aspirations, as per her faith in the  vital role of women in all the fields, Al-Ali lauded the significant role of H.H Sheikha Fatima Bint Hazza, Chairwoman of the Fatima Bint Mubark Ladies Sports Academy (FBMA), President of the Abu Dhabi Ladies Club, through her wise direction for the academy in which she is dedicated to supporting Emirati women in all sports games, in favor of their aspirations and in patronage to their promising talents in order to provide  their sports careers with more expertise, in addition to her keenness on achieving effective partnerships between the academy and the various sports federations and clubs and on launching initiatives that elevates the roof of women’s ambitions in sports in the UAE, beside Her Highness’s monitoring for the plans and programs to ensure the accomplishment their expected goals.

Regarding the FBMA Show Jumping Cup, Al-Ali emphasized the importance of the cup organized by the academy and which will be a significant event this year, as the academy pursued the expansion of the competitions’ scope to give lots of riders the chance to engage in this special sports experience in order to encourage them to gain more experience from their peering riders who come from the various countries of the world.

Al- Ali continued by stressing that Emirati women have reached a prominent position in the world of horse racing, endurance racing and horse jumping on the local and international level, where Emirati women were able to accomplish great successes in the Emirati equestrian sports sector through the past years, noting that the academy is keen to sponsor Emirati lady jockeys and to eliminate the obstacles in order to achieve their future aspirations, stressing that the academy always seeks the enrichment  the development march of the Emirati sports sector through holding and organizing international tournament and events for all sporting games, and  hosting international conference, pointing to the contribution of such events to the raising the ambitions of Emirati women and the improvement of their expertise and position on the Arab and international level, indicating the academy’s is eagerness to organize the FBMA Show Jumping Cup in the most optimum manner for all the organizational, logistical, technical, marketing and media aspects of the event, calling on all the participants in the cup to present their best performance for the sake of enriching the level of competition in the in a consistent manner with the significant level of success of the last year’s version of the cup, wishing luck and success to Emirati riders during the competitions of the cup and wishing for them to prove their ability to achieve accomplishments for the Emirati sports sector, and additionally presenting the academy’s thanks and gratitude to the Emirates Equestrian Federation for their valuable cooperation with the academy in organizing the cup and to Abu Dhabi Equestrian Club for hosting the cup’s competitions and praised the sponsoring entities of the cup: Al-Shiraa Stables, Longines, Healthpoint Hospital, the National Service, Yass Sports TV and Emirates Arabian Horse Society. 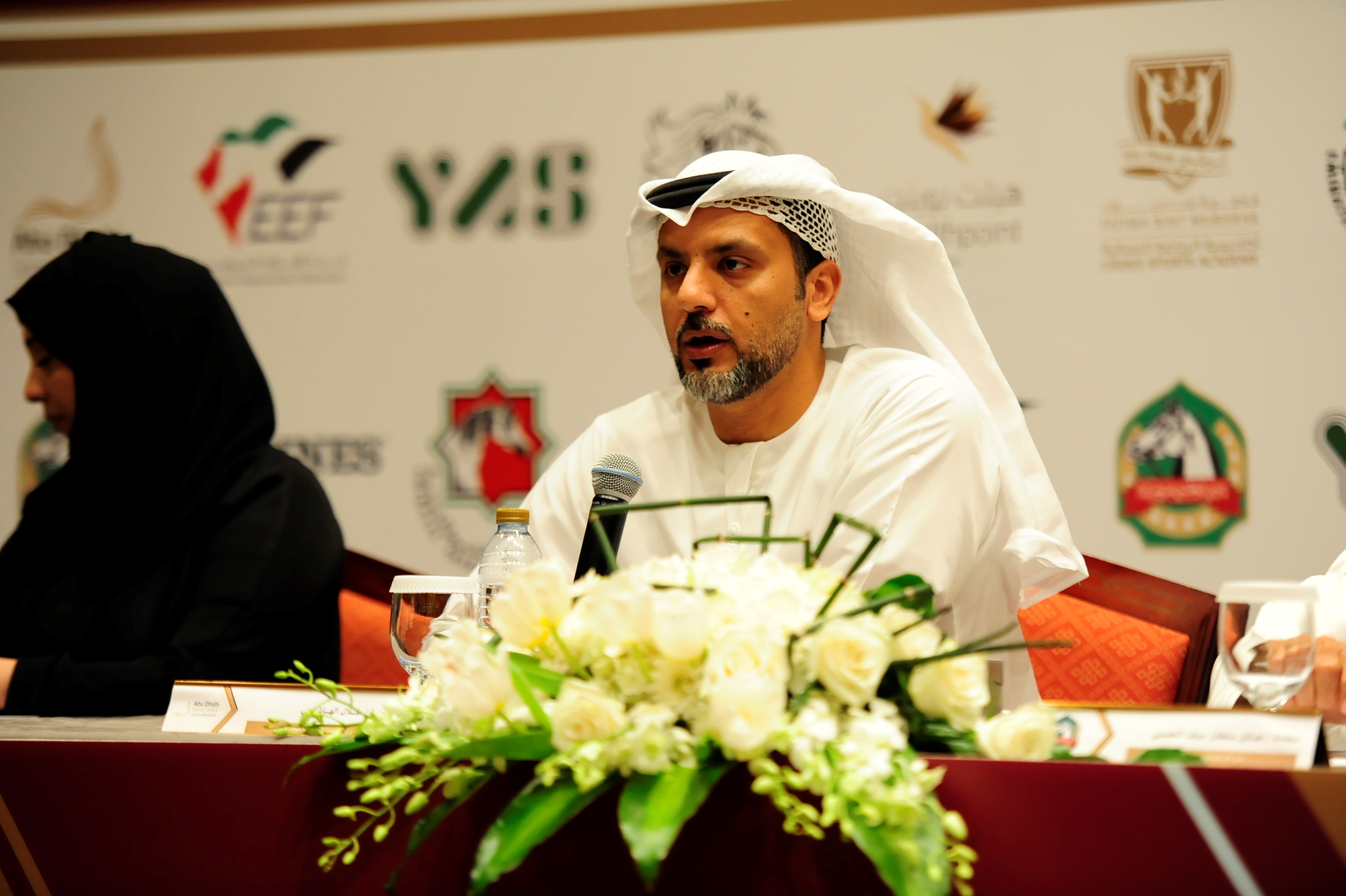 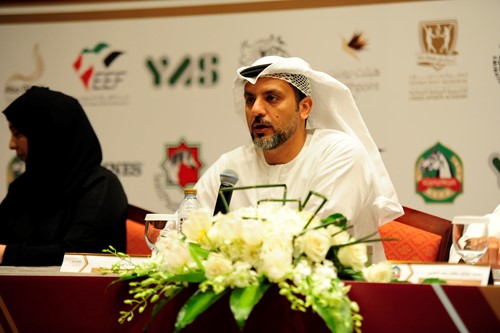 For his part, H.E Talal Al-Hashemi , The technical affairs director at Abu Dhabi Sports Council, lauded the great patronage of the wise high leadership for Emirati ladies sports, which the Emirati women achieved major successes during the past years thanks to it, and praised the pioneering role of H.H Sheikha Fatima Bint Mubarak (Mother of the Emirates) in supporting and sponsoring Emirati women in all the fields and the field of sports in particularly, assuring that the ADSC led by H.H Sheik Nahyan Bin Zayed pays great attention to the development of Ladies sports sector in Abu Dhabi, noting the honorable example represented by the noble role of H.H Sheikha Fatima Bint Hazza through sponsoring and supporting Ladies sports events in the UAE, which contributes to the development of the Emirati Ladies sports sector and reinforce its success.

Al-Hashemi indicated that the organization of FBMA Show Jumping Cup, became a constant event on the academy’s agenda, which shows the academy’s care for accomplishing the objectives of its programs and initiatives aimed at serving the academy’s mission of developing ladies sports in the UAE, noting that such the tournaments held by the academy take part in creating the diversity necessary to achieve the ambitions of Emirati women in the different sports games and to develop the emerging talents and skills and to bring in the international expertise and experiences through direct contact and competition as in this tournament which represents a serious step towards upgrading the level of excellence of the Emirati riders in show jumping.

Al-Hashemi assured that the ADSC is keen to support the plans and programs of the academy, which are intended for the development of ladies sports sector, especially those concerned with the organization and hosting International sports conference and competitions, where the council is associated the academy through a constructive partnership and promising plans purposed for materialize the common objectives of both parties into reality, pointing that the academy is eager to develop the successes of Emirati ladies in all sports games and presented his gratitude and appreciation to the Emirates Equestrian Federation; Abu Dhabi Equestrian Club; Al-Shiraa Stables; Longines; Healthpoint Hospital, the National Service; Yass Sports TV and Emirates Arabian Horse Society, and concluded with wishing luck and success for the participants in the cup. 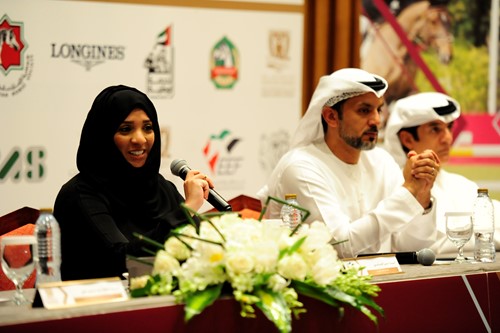 Mona alshamsi in her part  stated that the participation in this year’s Cup has increased exponentially, in which points to the success that we have achieved in the last version of the FBMA Show jumping Cup.