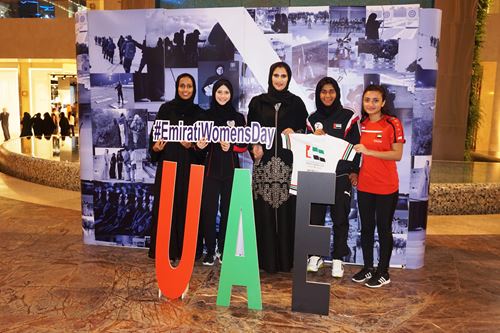 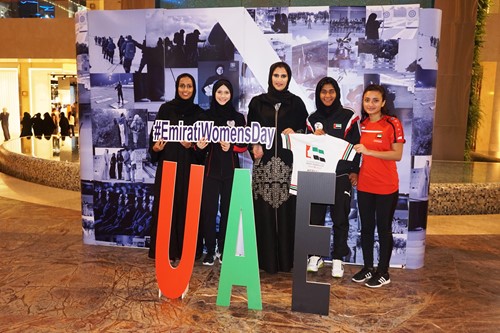 The event included a number of activities aimed at celebrating the achievements of Emirati women in the field of sports. The event met a great interaction from the attending public where they enjoyed watching live Jiu Jitsu performances made by Emirati Female players and included numerous presentations and live training sessions and friendly matches that amazed the attending public and introduced them to this exciting martial sport.

The event witnessed the attendance of a group of Emirati female sports stars including the holder of the UAE flag at Rio de Janeiro Olympic Games; the Emirati swimmer Nada Al-Bedwawi, Ayesha Al-Blushi, the first Emirati woman to lead the female weight lifting team at Rio de Janeiro Olympic Games, Zahra Lari, the Emirati Figure skating star who is the first Emirati figure skater to qualify for the Olympic Games in Figure skating and Alyaa Nasir the famous Emirati Volleyball player in addition to a number of Emirati female players of numerous sports such as Athletics, Fencing, Basketball, Sharpshooting and Archery.

The attending public was given the chance to meet the Emirati female sports stars directly where they took pictures with their beloved stars while the sports stars answered their questions and spoke to them about their experience in the world of professional sports and motivated them to practice sports and physical activities in addition to giving them advice regarding how to continue in sports while reconciling with their daily life activities, which in total made a positive impression on the participating ladies and young women.

The public also participated in other activities including drawing, mini golf and instant photography, while Healthpoint hospital provided some of it’s services to the public which were the measurement of the Body Mass Index (BMI) and providing medical advice and consultation regarding  general health, nutrition, body weight and physical fitness.

This year’s celebration was remarkable because it included the participation of Women Sports Administration at Sharjah Ladies Club, where members and players from the club took part at the activities of the event and it is duly notable to mention that the Emirati Women’s Day omes this year in the same time of the signing of a Memorandum of understanding between Fatima Bint Mubarak Ladies Sports academy and the Women Sports Administration at Sharjah Ladies Club that stipulates the reinforcement of cooperative relations between both parties in the field of training, education, organization of events and providing moral, media and logistic support between both parties.

About the Celebratory event, raysa Alketbi at FBMA started her speech by expressing her deepest congratulations for H.H Sheikha Fatima Bint Mubarak, Chairperson of the UAE General Women’s Union, Supreme Chairperson of Family Development Foundation and Chairwomen of the Supreme Council for Motherhood and Childhood “Mother of the Nation”, and praised the pioneering role that her highness played in the forming of the Emirati feminist movement and pushing Emirati women towards accomplishing  one achievement after the other in all the fields of life especially in sports. Alketbi presented her congratulations and salutations to Sheikha Fatima Bint Hazza, Chairwoman of the Fatima Bint Mubark Ladies Sports Academy, President of the Abu Dhabi Ladies Club, and lauded the great success she have achieved in the past years through leading the march of women sports’ development in the UAE.

Alketbi congratulated all the Emirati ladies and all the institutions and establishments concerned with women in the UAE especially those who work in the field of ladies sports for the coming of the Emirati Women’s Day and she articulated the academy’s pride in the achievements and success accomplished by Emirati women in the field of sports especially after the notable participation of Emirati women in Rio de Janeiro Olympic Games recently.

Alketbi said that the organization of this event comes in celebration of the Emirati women sports sector and the prominent Emirati female Athletes where a number of famous female players of numerous sports were invited to meet their fans as an effort to encourage them to brake the psychological barrier that might keep them from practicing sports through sharing the success stories of the famous stars in the world of professional sports with them.

Alketbi concluded with expressing gratitude to all the participants in the event specifically ADSC, Women Sports Administration at Sharjah Ladies Club, Healthpoint Abu Dhabi and Yas Mall for the great efforts they made to contribute to the success of the event.