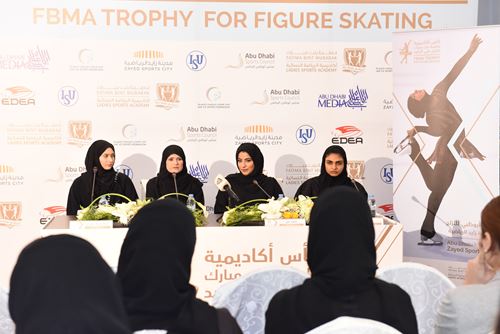 On 5-7 January the Fatima Bint Mubarak Ladies Sports Academy (FBMA) will welcome 2017 proudly with yet another edition of the FBMA Trophy for Figure Skating, as announced at an Press Conference earlier today. In its third year featuring in the calendar of the International Skating Union (ISU), the Trophy is the fruit of the enduringcollaboration between FBMA, the Abu Dhabi Sports Council (ADSC) and the UAE Ice Sports Federation, who are all committed to advancing sports participation in Abu Dhabi and the UAE.

In line with the community’s growing interest in ice sports, the Trophy will this year see increasedparticipation across its five categories of Senior, Junior, Advanced Novice, Basic Novice A and Basic Novice B, for females and males alike. With over 90 world-renowned figure skaters arriving to the UAE from 23 participating countries to completion the Zayed Sports City ice rink, andan also increased number of Emirati competitors, the Trophy promises to offer the audience an experience to remember while showcasing Abu Dhabi’s unique standing as a host-city of international sport events.

The Trophy will further provide an opportunity for UAE hopeful and FBMA-sponsored figure skater, Zahra Lari, to practice her technique in the lead up to the 2018 Winter Olympics, as she competes against some of the world’s best. “I am very excited about the upcoming Trophy, both as a figure skater and as an Emirati”, said Zahra who has been working very hard all year while recovering from an injury, in hopes of qualifying. “The FBMA Trophy has been a catalyst in my personal development as an athlete, as well as my preparation towards the 2018 Winter Olympics, and I am grateful to H.H. Sheikha Fatima Bint Hazza Bin Zayed Al Nahyan, for the support and trust invested in me throughout these years”, she highlighted.

Renowned as the only ISU international figure skating competition to be hosted in the Middle East, the FBMA Trophy has, since its inaugural edition in 2015, attracted many Emiratis to the ice both as athletes and as fans, and is truly becoming an annual tradition for the capital. As such, the prestigious organization of the Trophy has been a contributing factor to the UAE Ice Sports Federation being granted full-member status in the ISU last year, a fact which echoes the unresting efforts of the Federation to raise Emirati ice sports to world class standards.

“The Trophy has gained a permanent spot in FBMA’s annual calendar of events, and it could not be otherwise given the great impact it is having on the development of female athletesin the UAE and beyond”, noted Fatima Abdulrahman Al Ali, FBMA International Events Coordinator. “We are very proud to see the participation of female Emirati skaters increasing to six this year, and we are also confident of the momentum such initiatives are generating internationally for sports tourism in our country”, she added.

As in previous years, the UAE National Figure Skating Championship will take place on the margins of the FBMA Trophy, giving national athletes the chance to claim the UAE National Champion title.

About the FBMA Trophy for Figure Skating