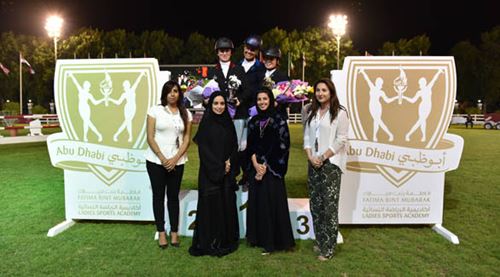 Attended the coronation Sheikha Bint Abdulaziz AL-Khalifa, a member of the Board of the Bahrain Olympic Committee ,Chairwoman of the Committee on Women and Sport, Sheikha Hessa Bint Sultan Bin Khalifa Al Nahyan, Sheikha Shamma Bint Sultan Bin Khalifa Al Nahyan, and Mariam Al Rumaithi, General Director of the Family Development Foundation, and Naiemah Al Mansouri, a Board member of Zayed Higher Organization for Humanitarian Care and the General Director of the blind Printing Press, along with the Board members of the academy who included Noura Khalifa Al Suwaidi, Dr. May Al Jaber, Dr. Omniyat Al Hajri, Dr. Moza Al Shehhi, Amal Al Afifi, and Raysa Humaid Alketbi the operations manager of the academy.

Sheikha Fatima Bint Hazza bin Zayed Al Nahyan, has express her deepest thanks and appreciation to Her Highness Sheikha Fatima Bint Mubarak «mother of the Nation» for her Generous sponsorship of the International Fbma Show Jumping Cup, also she praised Abu Dhabi Council on its role of supporting sports under the guidance of its chairman His Highness Sheikh Nahyan bin Zayed Al Nahyan and his continuous support for the progress of all sports, and women sport in particular, praising the distinctive cooperation from the Equestrian Federation, chaired by His Highness Dr. Sheikh Sultan Bin Khalifa Al Nahyan, the advisor to His Highness the Head of State, and she thanked the Abu Dhabi Equestrian Club, the sponsors and the supporters of the event.
Sheikha Fatima Bint Hazza has expressed her pride in the academy support of the ambitions and aspirations of the UAE girls in various sports, and to stand behind them while representing the UAE in the international Championships while holding the nation's flag high tall, where the  participation Emirati riders along with the other international riders in this competition, which reaffirmed the ability and stature of the daughters of our nation to achieve better results and achievements, as a result of their will and their great potential and their hopes.

She added that the Academy is keen to organize such events for the development of sports and the development of UAE girls expertise and skills and to raise their level and provide them with more experience, so as to enhance the presence of Emirati women  in the international Championships, and to enable the players and national teams of recording achievements for the Emirates sport.

Also she praised the successes achieved by the FBMA SHOW JUMPING CUP, which is organized by the Academy along with the participation of the international rider, congratulating all the riders who earned the first places in the three tours, expressing that the Academy pays great attention to the care and support to the Emarati riders who were able demonstrate their abilities in Horse racing ,endurance and Jumping Championships locally and internationally, pointing out that these achievements are the pride of the academy and all the women and daughters of UAE, in which the academy looks toward by its programs and plans to nourish and give more successes on its upcoming journey.

The event was held under the organization of the Academy and the support of Abu Dhabi Sports Council, and in cooperation with the Equestrian Federation and Abu Dhabi Equestrian Club and under the sponsorship of Abu Dhabi Media and «Viola communications» and «Longines».

Where the financial awards of the competition  reached up to AED 300 thousand and were distributed to the winners in FBMA SHOW JUMPING CUP, which saw a large participation.