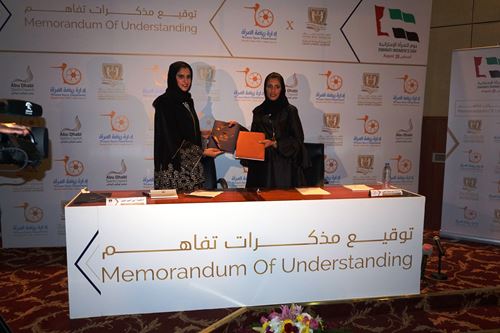 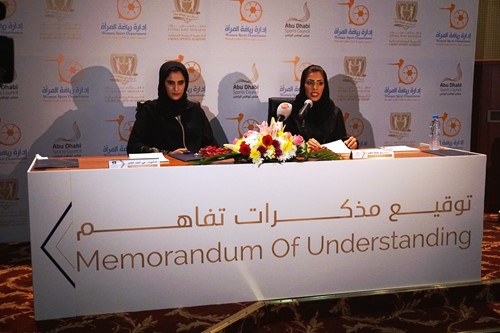 During the nation wide celebrations of the Emirati Women’s Day, Fatima Bint Mubarak Ladies Sports Academy signed a M.O.U with women sports administration of the Sharjah Ladies Club during the press conference that took place at the academy’s headquarters on Sunday 28th of August 2016. The Mou was signed by Mai Al-Jaber, board member of FBMA, member of the National Olympic Committee and Nada Al-Naqbi Director of the women sports administration at Sharjah Ladies Club.

The M.O.U is aimed towards enriching  the women’s sport sector in the UAE and to serve the future ambitions and strategies of the Emirati sports sector through advancing the level of cooperation and communication between the different women sports establishments in the UAE.

The articles of the signed M.O.U stipulate the mutual cooperation and coordination between both parties in the fields of training and event organization and the mutual exchange of moral, media and logistic support, where the academy will provide facilitation and the necessities to organize lectures and educational workshops for Ladies in the Emirate of Sharjah in addition to providing elite women athletes at Sharjah Ladies Club with necessary training and to provide the facilitation to host a training camp For them in Abu Dhabi, while at the same time both parties will cooperate in organizing sports events through organizing fencing , basketball and sharp shooting competitions regularly and sequentially in Abu Dhabi and Sharjah, FBMA will also providethe members of Sharjah Ladies Club with training sessions in Jiu jitsu and golf in Abu Dhabi, beside the mutual cooperation between both parties in organizing social events annually and sequentially in Abu Dhabi and Sharjah.

At the beginning of her speech; Mai Al-Jaber congratulated H.H Sheikha Fatima Bint Mubarak, President of General Women Union, Supreme Chairperson of the Family Development Foundation, Chairperson of the Supreme motherhood and childhood council (Mother of the Nation), Al-Jaber lauded the nobel support given by her highness for the sake the cause of empowering women in the past years. Mai Al-Jaber presented her congratulations to Sheikha Fatima Bint Hazza Bin Zayed, Chairperson of the FBMA Executive Board, President of Abu Dhabi Ladies Club, and praised the pioneering efforts made by her for the the sake of developing ladies sports in the UAE.

Al-Jaber congratulated all the organizations concerned with women affairs in the UAE and all the Emirati Ladies and noted that Emirati Women’s day is not only an occasion to celebrate the past achievements of the Emirati Women,  but its also a day sharpen the determination and to stimulate the energies in order to continue the work on presenting more achievements for the Emirati feminist movement and to contribute to the overall development of the UAE.

About the M.O.U Dr. Mai Al-Jaber stated that the FBMA strategy which aims for the development of the ladies sports sector in the UAE adopts the reinforcement cooperation and communication relations with the different local sports organization the sake of achieving the maximum efficiency of the resources and capabilities available in order to accomplish more achievements for the UAE sport sector, Al-Jaber pointed that the signing of the M.O.U is considered a benchmark on the road to full integration between all women sports organizations in the UAE through coordinating the efforts for the sake of the common goals which are reflected in the articles of the M.O.U where both parties agreed on mutual cooperation in the fields of training and events organization.

Al-Jaber additionally invited all Emirati women to participate in the Emirati Women’s day celebrations that are organized by the academy in cooperation with Abu Dhabi Sport Council, and with contributions from women sports administration of Sharjah Ladies Club, Healthpoint Hospital and Yas Mall, which started yesterday at 6 pm in “Town Square” hall in Yas Mall and included a number of activities for ladies and children like jiu jitsu, painting, instant photography, BMI measurement and a number of other activities which will be held in the presence of elite Emirati female athletes including the Olympic swimmer Nada Al-Bedwawi, the weightlifter Aesha Al-Blushi and the figure skater Zahra Lari and other prominent professional female Emirati athletes in other sports like athletics, volleyball, fencing, basketball, sharpshooting and archery, as a reflection of the academy’s mission to encourage more Emirati Ladies and young women to practice sports through the presence of such professional female athletes.

At the conclusion of the press conference, Al-Jaber presented her gratitude to Women Sports Administration at the Sharjah Ladies Club, headed by Nada Al-Naqbi; for the efforts it made to complete the signing of the M.O.U and expressed her hope that it achieves its goals in a manner that serves the common goals and ambitions of both parties.