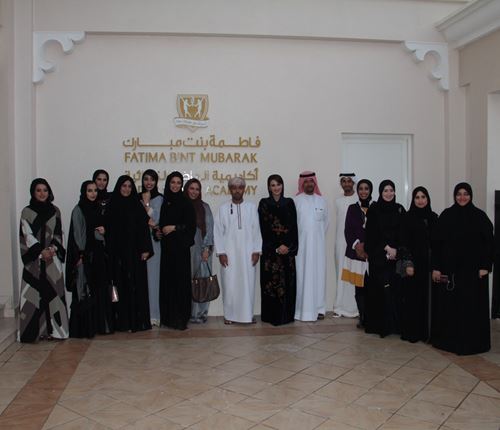 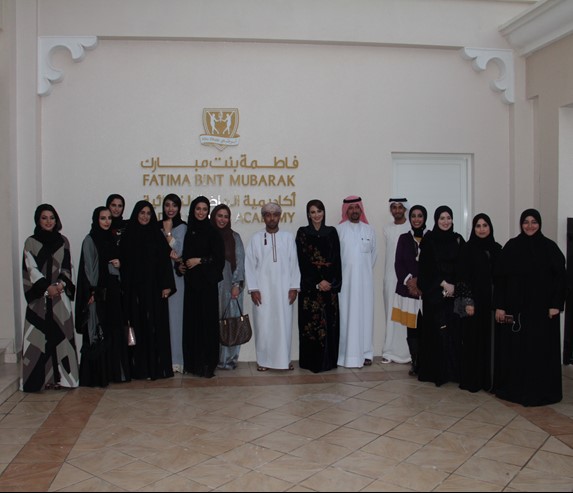 The opening ceremony was attended by the Chairman of the GCC Sports Journalism Federation, Salem al Habsy and the Members of the Federation’s Women’s Committee: Loulwa Al-Merri from Quatar, Ebtisam Al-Jubail from KSA, Reem Al-Taitoon from Kuwait, Eman Al-Salihi from Bahrain, Amal Al-Afifi, Amal Bu Shlakh, Naema Al-Mansouri and Dr. Omniyat Al-Jaberi, in addition to other public figures of the UAE sports community.

FBMA Board Member, Dr. Mai Al-Jaber began her opening speech by presenting her sincere thanks and gratitude to H.H Sheikha Fatima Bint Mubarak, Chairperson of the UAE General Women’s Union, Supreme Chairperson of Family Development Foundation and Chairwomen of the Supreme Council for Motherhood and Childhood, for her constant patronage and support for the events aimed at advancing women sports in the GCC and the Arab World.

Al-Jaber stressed the that the Hosting of the women’s committee of the GCC Sports Journalism Federation in the Academy’s headquarter came in adherence to the instructions given by H.H Fatima Bint Hazza, Chairwoman of the Fatima Bint Mubark Ladies Sports Academy, and President of the Abu Dhabi Ladies Club.

As a Board Member of the Academy; Al-Jaber considered choosing the academy to host the headquarter of the committee, as an embodiment of the high status that Abu Dhabi has reached; after it became the the starting point and the linking hub between all sports journalists in the GCC and the Arab world.

Nada Al-Shibani, Chairperson of the Women’s Committee of the GCC Sports Journalism Federation revealed five main objectives for the committee at its first year of operation and at top of them is the gathering of all female sports journalists of the GCC from all visual; audio; printed and electronic media ports, under a single roof, and the second objective is to broaden the base of female sports journalism practitioners through attracting promising talents and college students, while the third objective of the committee is the development of the skills of female sports journalists and to empower them to acquire actual journalism capabilities that allows them to reach professionalism, and coming after this objective is the achievement of successful communication and networking with the international and Asian Federations in order to open new prospects for cooperation, and lastly the fifth objective of the committee lies in presenting with unlimited support to all women’s institutions, organizations and committees in the GCC  in their different activities.

Furthermore Al-Shibani declared the committee’s assignments for 2016, where it included organizing a tour across the GCC countries to coordinate with local media women’s committees, and to survey the numbers of female sports journalists in the records of the Local committees with the aim of enlisting members in the GCC Women’s Committee, in addition to the assignments of achieving presence in the next Women's Clubs Games that will take place in Sharjah next year and organizing different workshops in the GCC countries throughout the next year.

Amal Al-Afifi: FBMA is an example for innovation in sports localy and internationally

FBMA Board Member, Amal Al-Afifi praised the choosing of the academy to be the launching pad of the women’s committee of the GCC Sports Journalism Federation, verifying that the trust given to the academy by sports institutions and bodies in the GCC region reflects the distinguished  position which the UAE Sports sector have; thanks to the support of H.H Sheik Khailfa Bin Zayed, President of the UAE; and the guidance of H.H Sheik Mohammed Bin Rashid, Vice President, Govoner of Dubai; and H.H Mohammed Bin Zayed Crown Prince of Abu Dhabi, Deputy Supreme Commander of the UAE Armed Forces; and Their Highnesses the members of The Supreme Council of the Union, Governors of the Emirates.

Al-Afifi noted the quantum leaps which the women’s sports sector have witnessed due to the unlimited support from H.H Fatima Bint Mubarak, Chairperson of the UAE General Women’s Union, Supreme Chairperson of Family Development Foundation and Chairwomen of the Supreme Council for Motherhood and Childhood, (Mother of the Nation), as Her Highness have given all encouragement and support to the march of women’s sports in the UAE; which in return; helped preparing Emirati women to achieve pioneering accomplishments in  this sector on the local, regional and international levels.

Al-Afifi said: “the efforts and guidance made by H.H Fatima Bint Hazza, Chairwoman of the Fatima Bint Mubark Ladies Sports Academy; transformed this academy into a center for creativity in all fields related to sports  through the initiatives and projects presented by the academy, which elevate the sports sector status, and today with this new initiative of hosting the launching of this notable award in the GCC region; the academy adds a new chapter to its accomplishments in the field of sports; and especially in the field of supporting women’s sports”.

Dr. Omniyat Al-Hajri: A meeting place for visions and ideas

Dr. Omniyat Al-Hajri lauded the female sports journalists in the UAE in particular, and in the GCC region in general who witnessed unmistakable improvements in the past years. She also praised the role played by the Women’s Committee of the GCC Sports Journalism Federation; hoping that the committee plays a part in exchanging visions and ideas in a manner that serves the objectives laid by the Federation for the purpose of serving ladies sports media.

Amal Bu-Shlakh, Board Member of the Federation, Secretary General of the UAE Women’s Football Committee, praised the great efforts made by H.H Sheikha Fatima Bint Mubarak, Chairperson of the UAE General Women’s Union, Supreme Chairperson of Family Development Foundation and Chairwomen of the Supreme Council for Motherhood and Childhood, for her unlimited support for the development of ladies sports in the UAE, and her deep keenness on improving all what develops the actions and movements dedicated to women in the UAE, GCC region and the Arab World, in addition to her careful and active pursuit of women empowerment locally, regionally and internationally, as embodied in the launch of the Women’s Committee of the GCC Sports Journalism Federation yesterday; Sunday the 17th of the current month in the FBMA in Abu Dhabi.

Bu-Shlakh said “the support we draw from H.H Sheikha Fatima Bint Mubarak is unlimited, and we always seek to invest this support to translate her farsighted vision, in order to advance the state of women in the field of sports in its different elements and components, as Her Highness have provided an ideal sports environment of an international standard for the Emirati women, and she always pursue the improvement of the status of Emirati, Arab Gulf and Arab women in the community in a manner that preserves their Major role in shaping the future generations and leading the society, hence Her Highness is considered a role model and a source of inspiration for Emirati women in all the aspects of their lives and in sports particularly, and today we witness the inauguration of this regional committee thanks to her Precious guidance and support”.

Bu-Shalakh lauded the efforts of H.H Fatima Bint Hazza, Chairwoman of the Fatima Bint Mubark Ladies Sports Academy, and President of the Abu Dhabi Ladies Club and her constant care for fulfilling the various needs of women's sports in the UAE through her instructions that strive to advance the integration of all the elements contributing to women sports sector especially the sports media on local, regional scales , and to accomplish the academy’s mission that intended to sublimate the stature of Emirati women in the women sports movement and with the purpose of encouraging young women to engage in sports and to motivate them to participate in the sport process in its entirety including sport journalism and to push them to achieve accomplishments in this field.

Bu-Shalakh expressed her gratitude for the GCC Sports Journalism Federation, for its support and effective contribution to the success of the launching of the women’s media committee which comes in the light of realizing the joint efforts and their integration for the sake of improvement the cooperation in the field women’s sports in the GCC region.

For his part, Mohammed Bin Hazam, the General Secretary of the UAE Football Federation, stressed that the UAE women’s sports in all of its elements reached an esteemed position in the international Sports Scene, thanks to the vision and support of H.H Sheikha Fatima Bint Mubarak, who gave so much so that women’s sports in the country became the model for advancement and development that it is today, and reinforced the culture of women’s sports among all Emiratis, and for instance in the domain of local women’s football we came a long way in short period of time, as in the past our women’s league used to depend heavily on foreign players unlike in the present day where all the local and national women teams comprise almost entirely of native Emirati women, and our national women’s football team made big  achievements recently and its ranked as the first in the GCC region and second in the Arab world and as the fifth in Asia and the seventy third on the world wide ranking.

The General secretary described the launching of the GCC Women’s Sports Media Committee as a significant event for every female journalist in the GCC region, calling on to them to take advantage of it in supporting women’s sports in the region and to cast a spotlight on its achievements and spread the culture of women’s sports in the community in a manner that is parallel to our native culture and traditions.