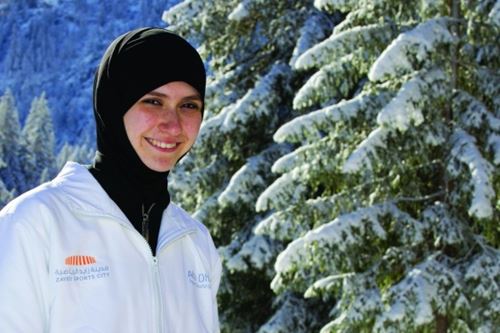 THE ICE PRINCESS INSPIRED BY A FILM, ZAHRA LARI HAS PAVED THE WAY FOR AN ENTIRE GENERATION OF FEMALE FIGURE SKATERS IN THE UNITED ARAB EMIRATES.

How did you get started in figure skating?
I started because of the movie, Ice Princess! We had to watch that movie because everything else in the theater was full. When I watched it, I immediately fell in love with the sport! I like how it’s a combination of an art and a sport. I told my mom I wanted to go try it and she said no. She thought it was dangerous.

How old were you when you saw the movie?
I was 11. And then, of course, I went immediately to my dad and (laughs), he was like, “OK, sure.” He picked me up from school one day, and we secretly went. I started with my coach, and I’ve been skating ever since then.

What was it like the first time you got on the ice?
I stepped on to the ice, and I fell. In the movie they made it look so easy! It’s like, she lands triples after skating for only a week. I’ve learned to just get up and try again because in figure skating you fall. A lot. The most important thing has to be getting back up and trying again.

When did you start thinking about competing in the Olympics?
Well the first three years of my skating, I was only skating once a week. On Thursdays,  it was “Ladies Day.” They told my mom that I had a natural talent and that I should start coming to the rink more. And then we had a guest coach come in from Romania, she told my coach that it’s 2012, and she’s ready to compete internationally. So I went to Italy in 2012. Even then, I was training more, but I never thought of it as a career like I would want to do it professionally or be a completive figure skater. But when I got there, I realized that it’s something I do want to do.

Do many people in the United Arab Emirates compete in figure skating?
Well we do have a lot of people that just come and skate. We even have a female hockey team now. But figure skating is kind of difficult because not a lot of people know about it, since it’s a winter sport. But since I’ve started competing, we do have a younger generation of skaters coming up. We do have some skaters that are ready to compete at a young age, but they can’t find the financial support for it. That’s why I’m going through all these struggles, so they can go through it easier later on.

Do you think your competing in figure skating has inspired other young girls to try the sport?
Of course. To begin with, they never thought they could go anywhere with this sport. Everyone was looking at it as just a hobby. But since I went there and saw that it is possible, a lot of them are starting to join in.

You said that your mother wasn’t supportive of the idea. Is you family supportive now?
Yes, my family is very supportive! If you look at it from my uncles’ or my dad’s side, they do hear more criticism then I do from their coworkers saying, “How would you allow your daughter to do this?” But my family says, “What’s wrong with what she’s doing? She’s keeping a healthy lifestyle and doing what she loves, so it’s fine.” They really support me. My dad has been paying for me for the past eight years. This was the first year that I got sponsorships.

Has anyone been critical to your directly?
When I came back from Italy in 2012, that’s when all the media attention came and I didn’t expect it. We found a lot of negative comments online, which I think is normal.  But it did scare my mom a bit. She asked my dad if we should allow her to keep doing this. She would say, “Look at what people are saying!” My dad told her not to look at that stuff. I don’t even look at it, I mean why should I? It will only make me upset for no reason. As long as my family is supporting me, that’s the only thing that matters. 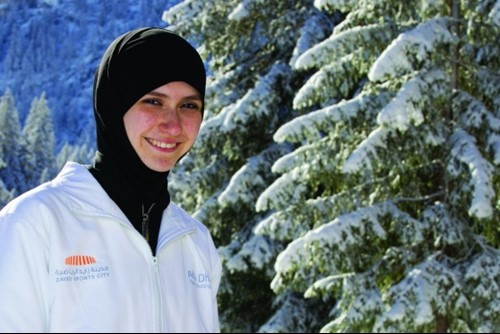 Tell me about your skating costumes? Are you inspired by a certain type of fashion?
I have two ladies that do my costumes. One lady lives in Dubai, and I have another local lady as well. I pick my music first. Then, we do the choreography. Once I have my choreography and music, we try to look figure out the colors and all those kinds of things. I actually find them really easy to make, because before, females weren’t allowed to wear pants during competitions, but now it’s allowed. You still see a lot of females that wear pants, because they feel more comfortable in it.

How do you manage to fit studying into your program?
Well, going to a university is a lot easier, because usually with school you have a fixed schedule. With a university, I can pick my own classes. During competition season, I skip a semester, because it’s rough balancing school and six competitions. Normally, I train in the morning from 6:30 a.m. - 8:00 a.m. and then I go to the university. From 2:00 p.m. – 5:00 p.m., I go back to the rink. I come home and eat something, try to do some work, and then two hours of gym at night before I go to bed.

What are you studying?
Environmental Health and Safety.

Any plans to use that some way after everything is done?
Maybe later, but I want to do something with figure skating. Once I stop competitive figure skating, I want to be a coach to develop figure skating UAE, and step up a national team in order for them to compete internationally.

And you are already coaching younger kids?
Some are four years old, I’m actually coaching my coach’s daughter and she’s a year and a half.

What would you say your biggest challenge is with being a figure skater in a country that is incredible hot?
The biggest challenge has to be gaining people’s awareness to what I do, and for society to accept what I’m doing. They are starting to get more open about it and more people are knowing about the sport. It will take time, but I’m willing to work hard, train, and compete. Eventually, they are going to know more about it.